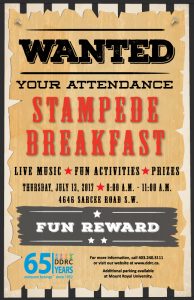 Yahoo! It’s almost time for the Developmental Disabilities Resource Centre of Calgary’s annual Stampede Breakfast, and we would love have you as our guest!

Guests will include the Stampede Queen and Princesses, Starr the pony, local politicians, and many more!

The DDRC Stampede Breakfast takes place in our first-floor parking lot, located at 4646 Sarcee Road SW. Parking is available at Mount Royal University in parking lot 1 (look for our signs).

We hope to see y’all there!

Yahoo! Thursday, July 14 was the DDRC’s annual Stampede Breakfast, and we had a rootin’-tootin’ good time!

We are excited to say that we served 800 breakfasts, and raised more than $1,000 thanks to the generosity of our wonderful guests! Chickweed, a great local band, had people up and dancing during the entire event. Everyone was excited to see the Stampede Queen and Princesses, the Stampede Indian Princess, and Star the pony and Diane from Horses R Cool come by to visit. We were also thrilled that a number of provincial politicians attended our Stampede Breakfast and chatted with our guests, including MLAs Leela Aheer, Greg Clark, Deborah Drever, Richard Gotfried, Sandra Jansen, Brian Malkinson, and Angela Pitt; Minister Irfan Sabir; and Mayor Naheed Nenshi.

There was even a pancake flipping competition between Greg Clark and Nenshi:

Battling it out with @nenshi for the title of best pancake flipper in town at @DDRC_Calgary #Stampede2016 #ableg pic.twitter.com/L3m0oqVn0H

We’d like to say a special thanks to Sarcee Plaza Starbucks for their generous coffee donation, and Tree of Life Canada for their generous pancake mix donation. We are also grateful to the Stampede Promotion Committee for providing a western welcome to all of our guests.

Here are some highlights from the day: 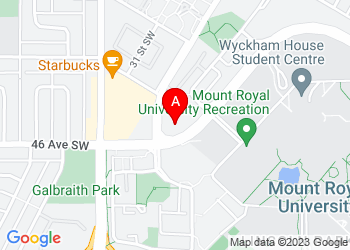 On May 28, 2003, the DDRC launched the “everyone belongs” campaign, with the goal of creating a social brand that would communicate the value to everyone when people with developmental disabilities were included in everyday life.